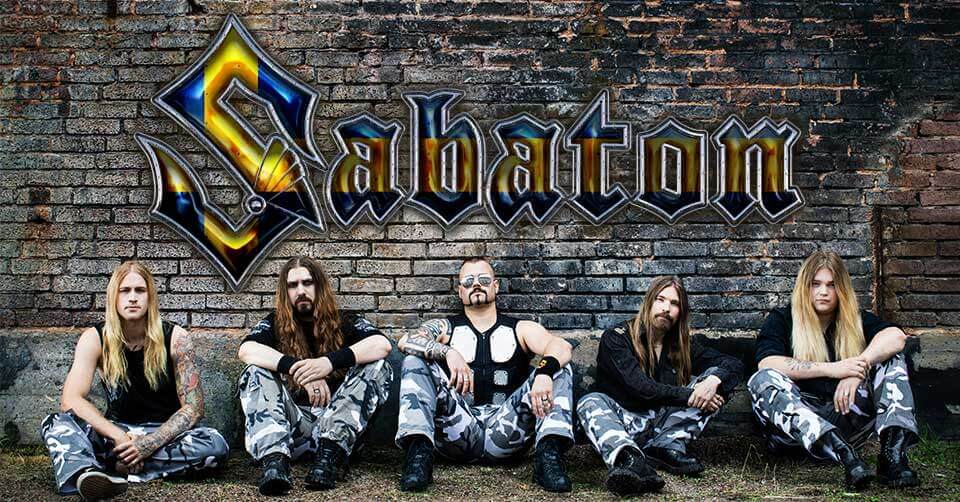 Sabaton is a Swedish Power metal band from Falun, Sweden formed in 1999. The vast majority of their albums are written about historical events, mainly wars and significant battles. This is heard in the albums Primo Victoria, The Art of War, Attero Dominatus, Coat of Arms, Carolus Rex, Heroes, The Last Stand and The Great War in which all of the songs contain these motifs, except final tracks which are tribute songs to influential heavy metal bands. Lyrical content drawn from World War I, World War II and other conflicts is prevalent and includes songs about battles and leaders on all sides of said conflicts. Their 9th album, The Great War (2019), reached number 1 on Swedish and German music charts.

In April 2012, guitarists Oskar Montelius and Rikard Sundén, drummer Daniel Mullback and keyboardist Daniel Mÿhr left the band to form Civil War. Vocalist Joakim Brodén and bassist Pär Sundström continued with new members. As well as extensively touring internationally, the band have a festival in their home town of Falun, Sabaton Open Air in August and an annual cruise, Sabaton Cruise, in November.

Sabaton has been referred to as one of the "big four" power metal bands, along with Helloween, Blind Guardian and DragonForce.  They are one of the most successful rock bands in Swedish history, with their album Carolus Rex being the best-selling Swedish heavy metal album of all time.

Sabaton was formed in December 1999. After the first songs were recorded in Peter Tägtgren's studio, The Abyss, Sabaton was contacted by a couple of record labels. The band signed with the Italian label Underground Symphony, which then released, internationally, the promo CD "Fist for Fight".

The disc, distilled from two demo tapes recorded between 1999 and 2000, was intended to promote forthcoming Sabaton releases. In 2002, a new album, Metalizer was recorded and was supposed to be distributed by Underground Symphony as the band's debut album. After two years of waiting, during which the band held various performances across Sweden, the album was abandoned. 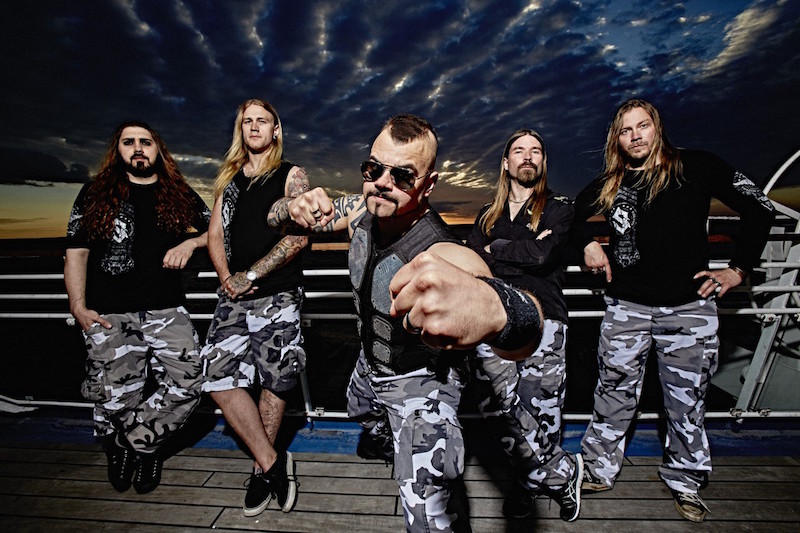 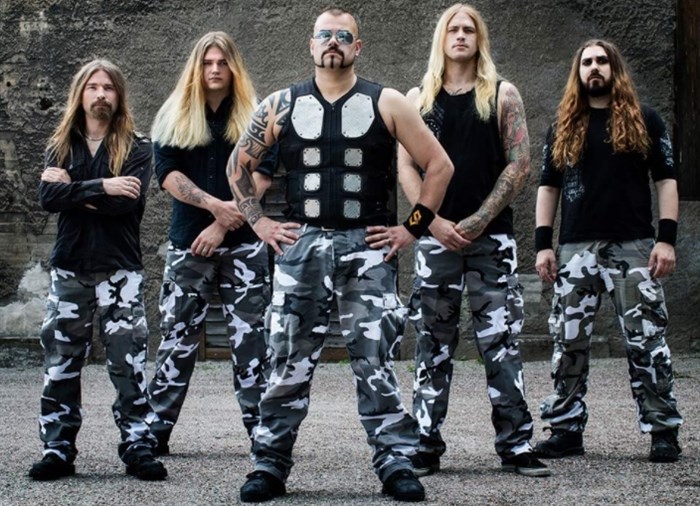 Sabaton signed with Black Lodge, the metal division of the Sound Pollution record label. In early 2005, keyboardist Daniel Myhr was recruited in order to relieve Joakim Brodén of his keyboard duties. In early 2006, Sabaton toured in support of Edguy and DragonForce. The band's third album, Attero Dominatus, was released in Europe on 28 July 2006. In March 2007, Sabaton released Metalizer as a double disc together with Fist for Fight, the first compilation album, along with the previously unreleased song "Birds of War".

As a follow-up to Metalizer, in May 2008, Sabaton released its fourth album The Art of War, an album inspired by the influential book by Sun Tzu, from the 5th century BC. The decision to base the album upon Sun Tzu's book came from the idea that in the 2000 years since the book was written, the human race has achieved many things, but, apart from weapon advancements, operational art, and strategy, war itself has remained basically the same.

The album contains the singles "Cliffs of Gallipoli" and "Ghost Division". They toured Europe in 2009 as an opening act on the HammerFall Tour. After their Bloodstock Open Air performance, the band again went on tour with DragonForce, towards the end of 2009, for eighteen shows in the UK.

The band had hoped to begin recording the next album in October but with concerts booked and the DragonForce support tour the following month, it was pushed back. On 23 December 2009, the band announced the name of their forthcoming album.

Coat of Arms contains a majority of songs about World War II including the Winter War. They announced it on their official website, and posted a link to a YouTube video containing the album art and a teaser music sample. 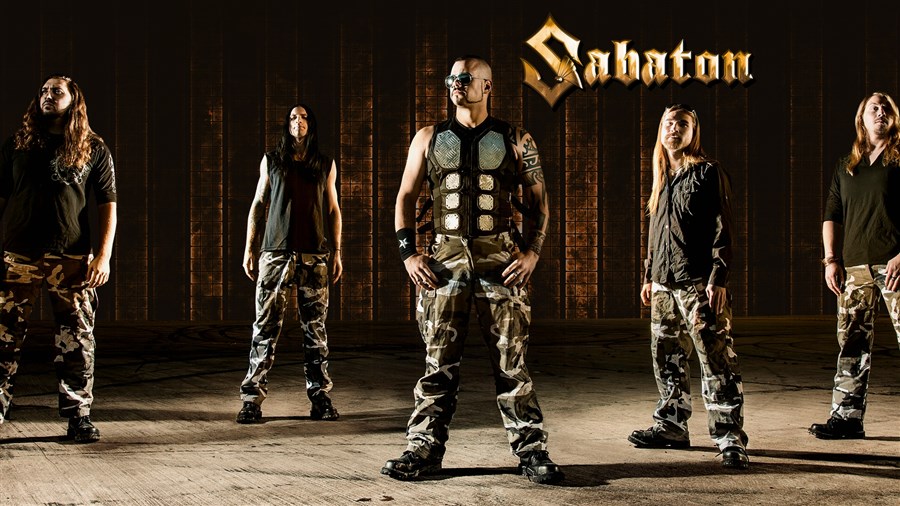 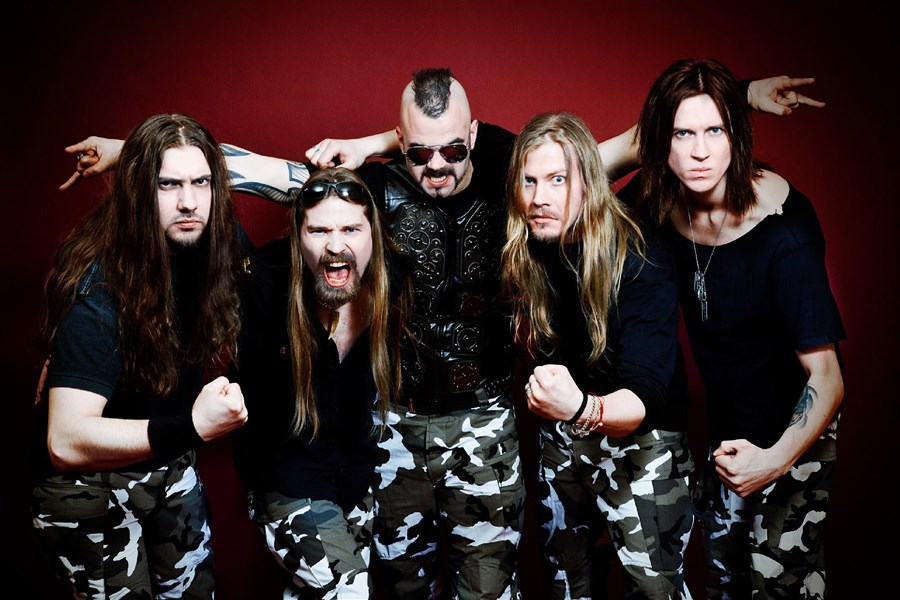 In 2012, two-thirds of Sabaton's lineup left the band. On 31 March vocalist Joakim Brodén confirmed rumors that the band would be going separate ways, with only Joakim Brodén himself and bass player Pär Sundström staying on board. Sabaton was joined by new members Chris Rörland and Thobbe Englund on guitar, and Robban Bäck on drums.

In January 2014, the band announced the cover of their new album called Heroes, then due to be released on May 16, 2014. The album proved to be a hit and made #1 on the official Swedish album chart. On 27 January the band was announced to play at the Download Festival in June. In October 2015 They performed their first concert in Japan in Loud Park Festival.

In December 2015, five songs by the band were added to the third external music pack for the strategy game Europa Universalis IV by Paradox Interactive.

On June 6, 2016, the 72nd anniversary of D-Day, they released a music pack for the Paradox game Hearts of Iron IV with songs based on World War II, the theme of the game. They released a second on 26 January 2017.

Their eighth album The Last Stand, was released on August 19, 2016, announced in April. On June 10, 2016 the first single of the album was released, called "The Lost Battalion" and about the eponymous military unit of World War I. On July 25, 2016, the band announced that guitarist Thobbe Englund had left the band. Thobbe Englund played his last show with Sabaton at Sabaton Open Air 2016. 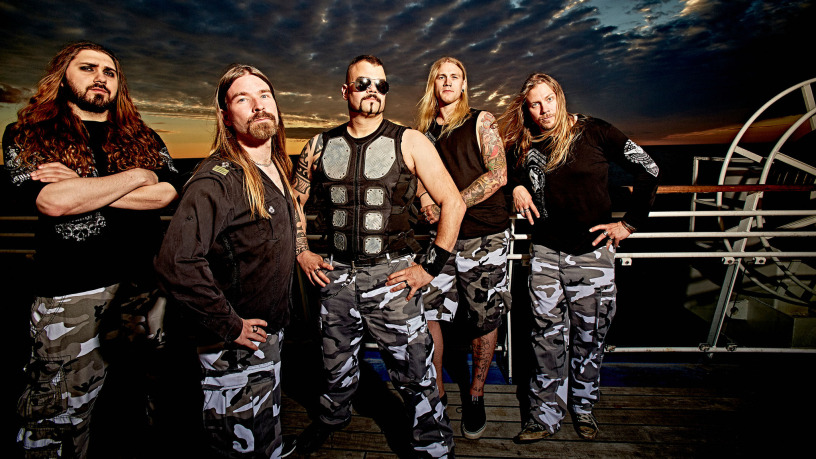 Tommy Johansson of Majestica was announced immediately as the new member after Thobbe Englund's final show with the band.

Pär Sundström stated in a 2017 interview that the group would be touring less in 2018 so they could concentrate on writing and recording their next album. Joakim Brodén confirmed a 2019 release date for the still-untitled album in a September 2018 interview on MAD TV's show TV War. On December 31, 2018, it was further confirmed in an official announcement in a YouTube video. 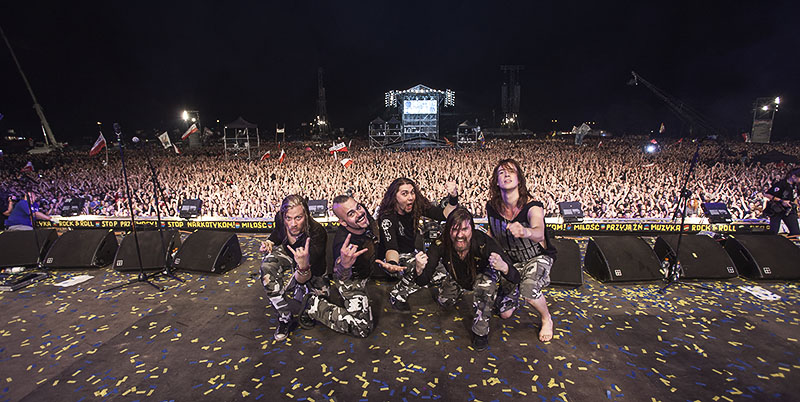 Sabaton History and The Great War (2019)

On January 8, 2019, the band announced the creation of a YouTube channel called Sabaton History, a cooperation between Indy Neidell, TimeGhost History and Sabaton. The channel documents the history of the events behind Sabaton songs and the songs themselves. The channel was created on 7 February 2019.

On 22 April 2019 Sabaton released a standalone single, "Bismarck", in a collaboration with Wargaming  and their game World of Warships. The song is about the German Battleship Bismarck, one of the biggest ever built in Europe. Commissioned in August 1940, it sank in May 1941 after an intense hunt in the North Atlantic.

On April 2, 2019, the band announced a new concept album about the First World War entitled The Great War. On 5 May 2019, they played in Plzeň, Czech Republic, on the anniversary of the Prague uprising. The album was released on 19 July 2019. The first single on the album is 'Fields of Verdun', which was released on May 3. On June 13, the lyric video for the song, "Red Baron", was released. On June 27, the premiere of The Great War was released. On August 1, 2019, the band performed their 20th anniversary show at Wacken Open Air festival 2019; during the gig former guitarist Thobbe Englund joined the band on stage for two songs.

In the second half of the show Sabaton invited other former members to the festival's second stage - Rikard Sundén, Daniel Mÿhr, and Daniel Mullback, along with Thobbe Englund. Rikard Sundén, Daniel Mÿhr, and Daniel Mullback are all members of Civil War, a similar band formed by the three along with Oskar Montelius, another former Sabaton member, as well as Nils Patrik Johansson and Stefan Erikkson, 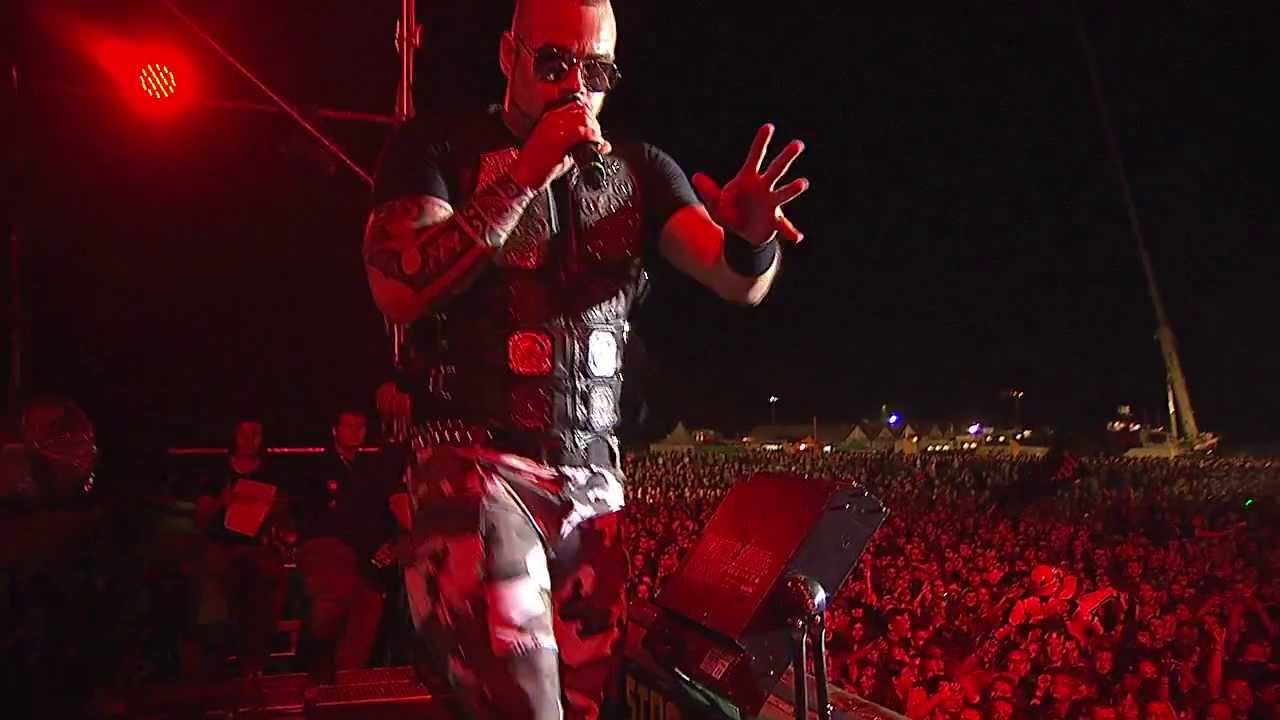 neither of whom are former Sabaton members. On August 30, 2019, the band was involved in a serious car accident in Tunisia while returning from a music video-shoot in the Sahara Desert. Injuries from the wreck forced them to cancel a show in Gdańsk, Poland. 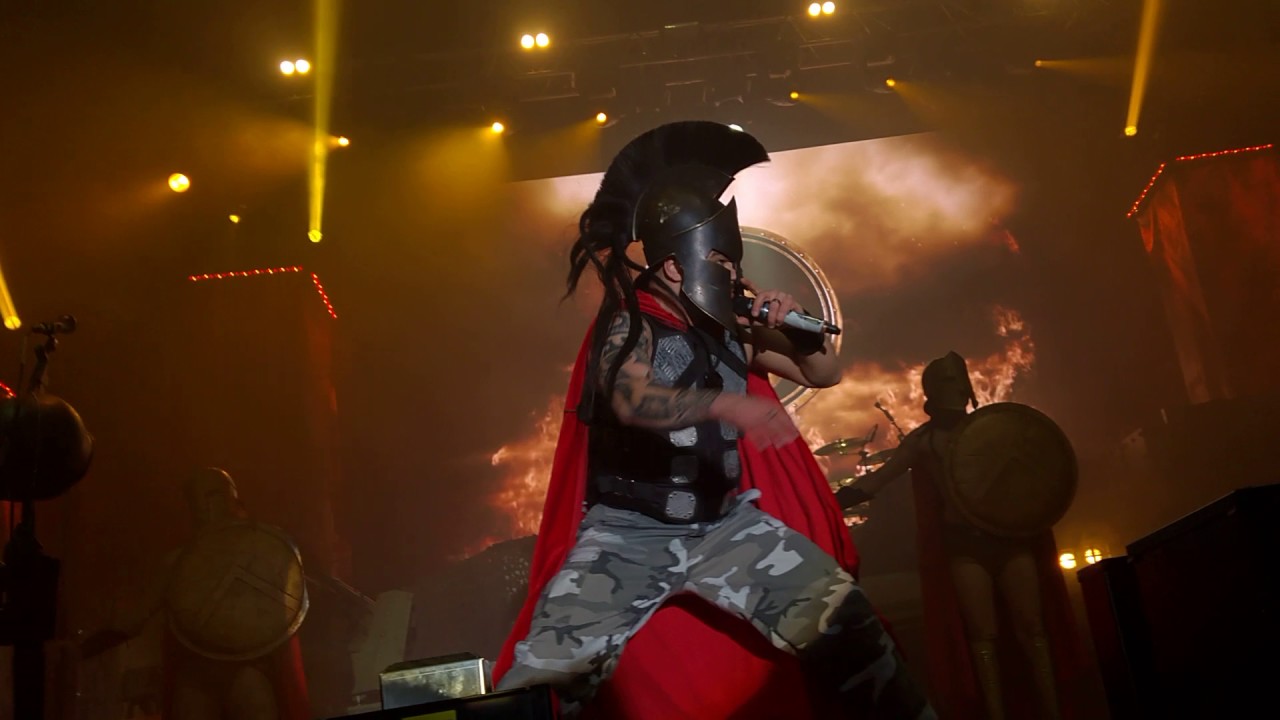 Single releases and The War to End All Wars (2020-present)

On December 23, 2020, Sabaton posted a short teaser of a new song on YouTube, writing: "We bet you did not see this one coming.. Are you ready for some new Sabaton music? Wait no more! Hear now a teaser of one of our upcoming songs.." On the next day, the band announced that they would begin recording their tenth studio album "in a few days".

citing the fact that Sabaton had played on Crimea in 2015 on a festival hosted by the Russian motorcycle gang Night Wolves.

On May 7, 2021, a new single called "Defence of Moscow", an English cover of a song in Russian by Radio Tapok, was released.

On August 25, 2021, the song "Steel Commanders" was released in support of new Sabaton content in the popular video game World of Tanks. It was later elected by Loudwire as the 33rd best metal song of 2021.

On 30 September 2022, the song "Father" about German scientist Fritz Haber was released as the first single from their EP Weapons of the Modern Age, part of a planned three-part trilogy titled Echoes of the Great War. 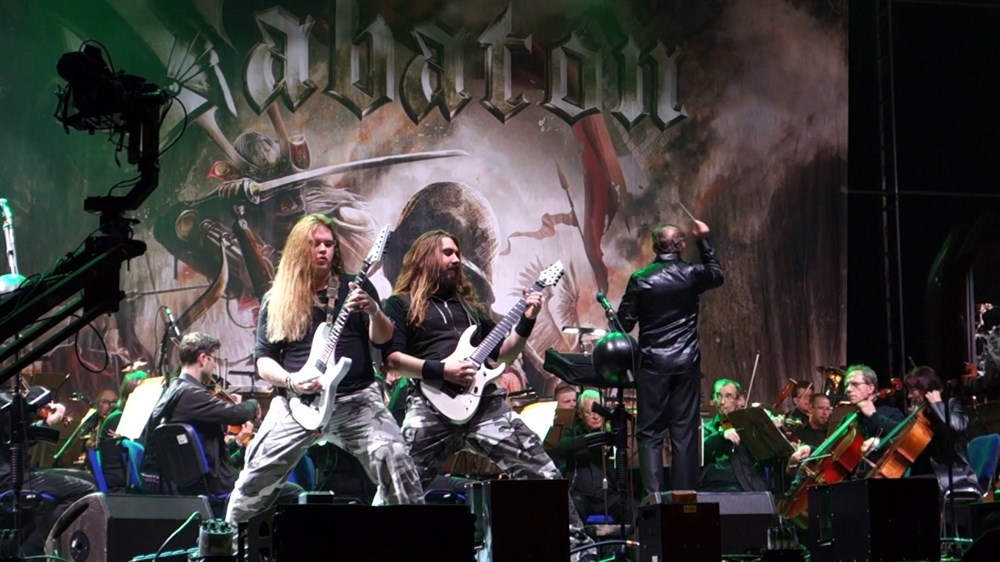 The band's main lyrical themes are based on war, historical battles, and acts of heroism-the name is a reference to a sabaton, a knight's foot armor. The armor and battle theme is heard in most songs in almost every album except Metalizer.

In their album, The Great War, which was released on July 19, 2019, all the songs were based on World War I. Lyrical content drawn from World War I, World War II and other historical conflicts is prevalent and lyrics often recite stories of heroic deeds by men, women, and armies, such as the song "White Death", for example, which was made in honor of legendary Finnish sniper Simo Häyhä.

Sabaton is often referred to as a Power metal band by both music critics and the general public - however, the band has traditionally rejected the term and they consider themselves a unique form of Heavy metal.

"I don't think Sabaton can only be categorized as power metal, as the two main attributes of power metal are high pitched vocals and fantasy lyrics and Sabaton have neither of those.

We simply play our version of heavy metal-what heavy metal is to us. I'm sure that has impacted our reach, in addition to the fact that we don't give up after only a few tries! That, and Sabaton's music appeals to people of all ages."

Joakim Brodèn has also made similar statements regarding the difference between Sabaton's low vocals and the high vocals of traditional power metal. 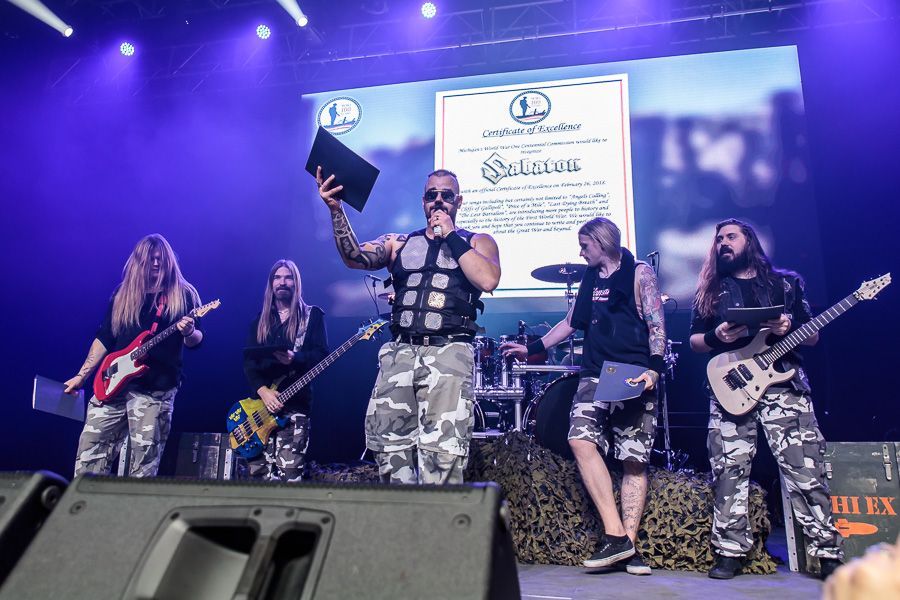 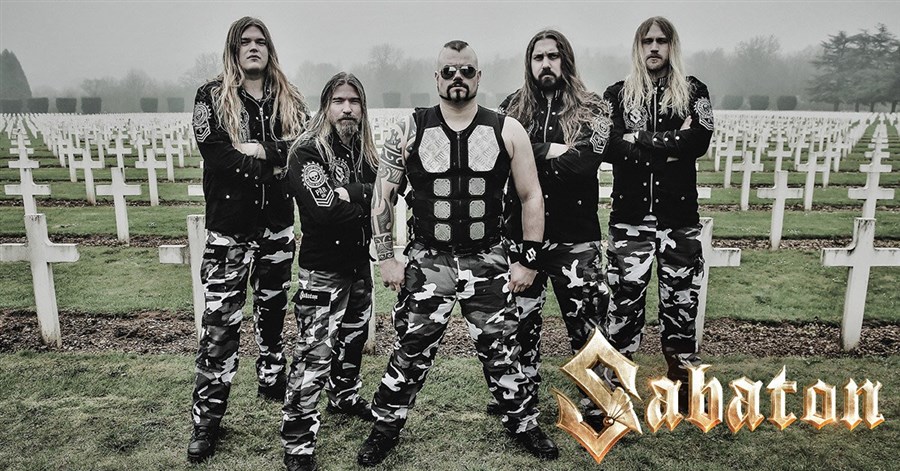