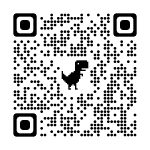 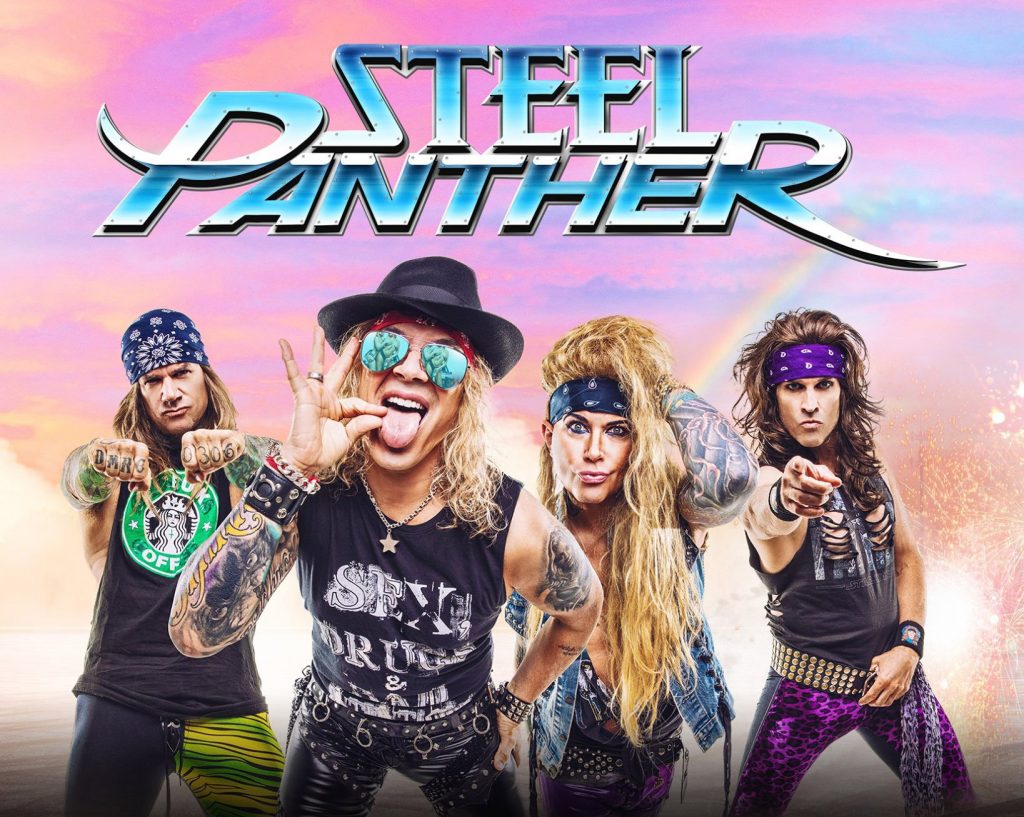 Steel Panther is an American comedy rock band from Los Angeles California, mostly known for its profane and humorous lyrics,

as well as its exaggerated on-stage pastiche of the stereotypical "Glam metal" lifestyle.

he quartet began to gain popularity on the Sunset Strip during the early 2000s under the name Metal Shop (2000-2003), Danger Kitty (2003), and changed it into Metal Skool (2003-2007), and then in 2008 into Steel Panther. Their lineup consists of vocalist Ralph Saenz ("Michael Starr"), drummer Darren Leader ("Stix Zadinia"), bassist Travis Haley ("Lexxi Foxx"), and guitarist Russ Parrish ("Satchel").

The band did weekly shows on Monday nights at the Viper Room, and subsequently the Key Club, playing covers of hair metal hits while sharing their love for the bands that made the songs famous. Despite the name changes, and some members putting in time in a Van Halen tribute band, they finally managed to gain some success. In 2003 Steel Panther released "Hole Patrol", their self-produced debut extended play. 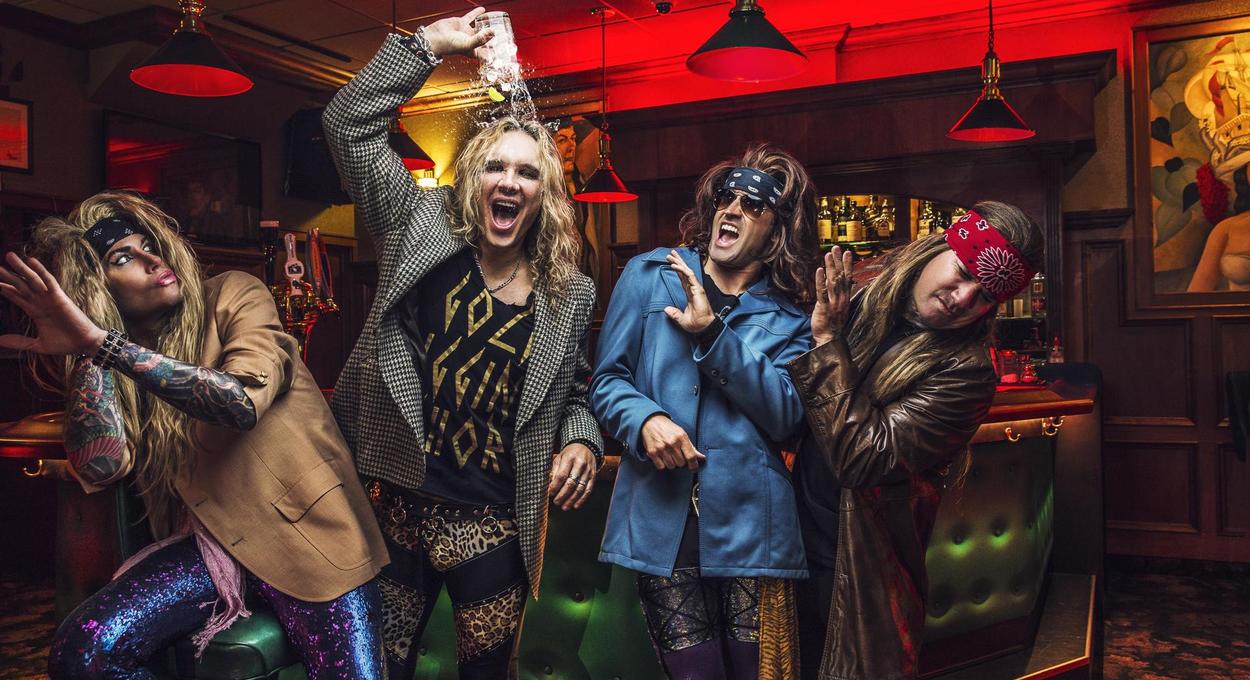 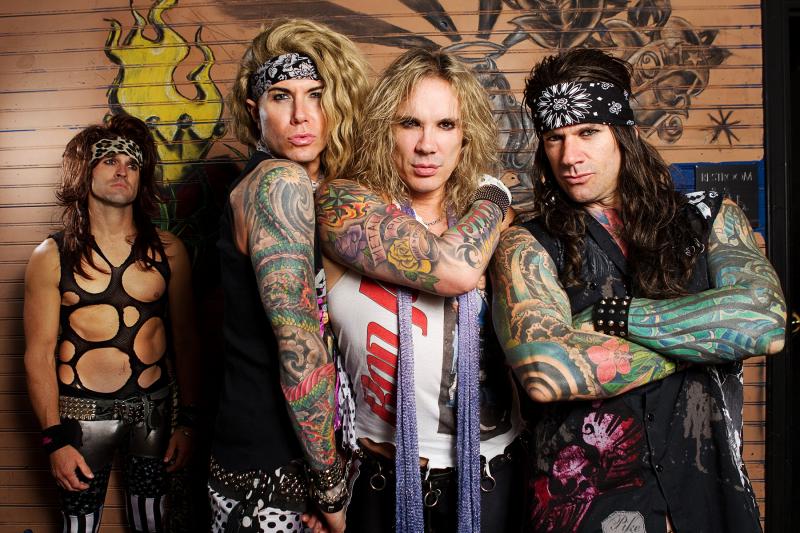 The band appeared in a Discover Card advertisement as Danger Kitty and in the sitcom Drew Carey Show as themselves. Also in 2003, their song "Death to All But Metal" was included in a compilation CD called "Hey, That's What I Call Sludge! Vol. 1" put out by the Metal Sludge web site.

Their cover of the song "Fantasy" by Aldo Nova was used as the opening musical theme for the MTV program Rob Dyrdek's Fantasy Factory. On November 27, 2007 Metal Skool played original songs as well as covers of KISS songs at the Gene Simmons roast,

they can be seen in the background of Gene Simmons' reality show Gene Simmons Family Jewels. That year, they also appeared as themselves on Las Vegas in the episode "The High Price of Gas".

In April 2008 the band decided to change their name from Metal Skool to Steel Panther, making a new debut at The Rockin' Saddle Club in Redlands, California. In an interview with Michael Starr, he states that the band's name wasn't inspired by Steel Dragon, the band with Zakk Wylde and Mark Wahlberg in the movie Rock Star (in which Michael Starr makes a cameo appearance). In May 2008, the band signed a contract with Republic Records  (owned by record label Universal Records) announcing plans for a new studio album. 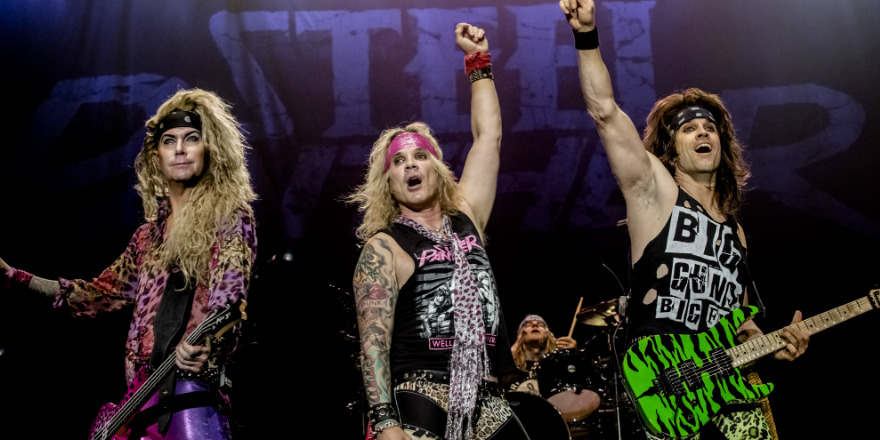 The record features hit singles, "Community Property" and "Death to All but Metal" as well as notable guest vocal performances from Corey Taylor, Justin Hawkins, and M. Shadows. Sometime collaborator Dean Cameron, also credited with co-writing "Supersonic Sex Machine" on Balls Out, directed and co-wrote a pilot presentation in an attempt to land Steel Panther their own television program.

The record's success also caught the attention of the Grammys, making it onto the "Best Comedy Album" ballot in October 2010, yet failing to reach a nomination.

The track "Eyes of a Panther" from Feel the Steel is featured on the soundtrack for the video game Skate 3.

Steel Panther released their second album Balls Out on October 31, 2011 in the UK and on November 1, 2011 in North America also through Universal - Republic. Balls Out continued their revival of the heavy metal genre and debuted at No. 1 on the UK iTunes Rock chart, surpassing Megadeth's TH1RT3EN  and Lou Reed's and Metallica's Lulu.

Balls Out also debuted at No. 4 on the US iTunes Rock chart, No. 40 on the Billboard 200 chart and at No. 1 on the Billboard Comedy chart with first-week sales of 12,000 copies in the US. Due to their growing popularity, Steel Panther were invited by Def Leppard to join them and co-headliners Mötley Crüe as "Special Guests" on the  Mirrorball Tour in December 2011. Exactly one week after ending the UK arena tour in London with Def Leppard and Mötley Crüe, 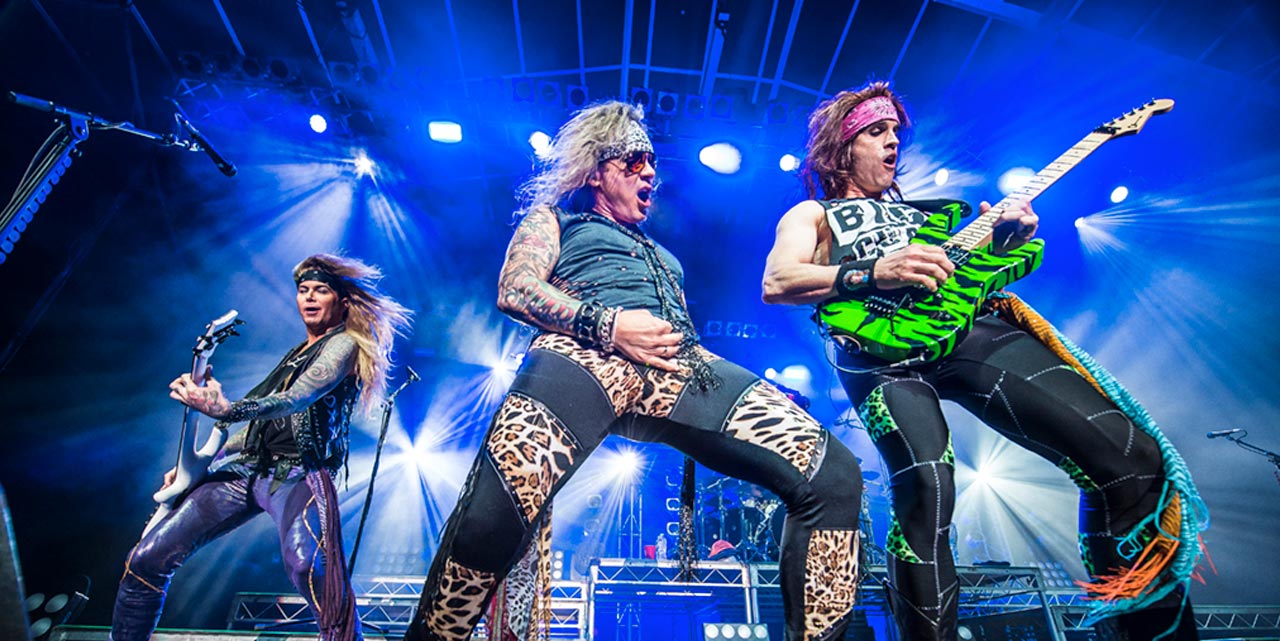 Steel Panther opened for Guns N' Roses at the Forum in Los Angeles, CA on December 21, 2011.

Steel Panther released their first Live DVD British Invasion in September 2012. The DVD was released worldwide on October 22, 2012. The DVD was filmed at Brixton Academy in London and features a two-hour concert/documentary based on the band's sold-out British tour.

Steel Panther played on the main stage at Download Festival in June 2012, during which they were joined on stage by Corey Taylor of Slipknot to play "Death to All But Metal". Taylor wore wellies on stage. They played in front of a crowd of over 100,000 people. Steel Panther toured Australia in December 2013, supported by Buckcherry and Fozzy. Shows were sold out in Brisbane, Sydney, Melbourne, Adelaide and Perth between 6 and 12 December.

In late 2013, Steel Panther announced a new tour in the year 2014, titled the "Spreading the Disease (S.T.D.) Tour". They toured Europe throughout February and March 2014. In support of their latest album, Steel Panther began touring North America in May 2014, their first headlining tour of America. In June, they moved the tour to Europe and continued to tour through August 2014.

The band released their third studio album All You Can Eat on April 1, 2014 on the independent label Open E Music, via Kobalt Label Services. The album was officially announced in September 2013. The first single from the album is "Party Like Tomorrow Is the End of the World". The second single, "The Burden of Being Wonderful", was released January 21, 2014. 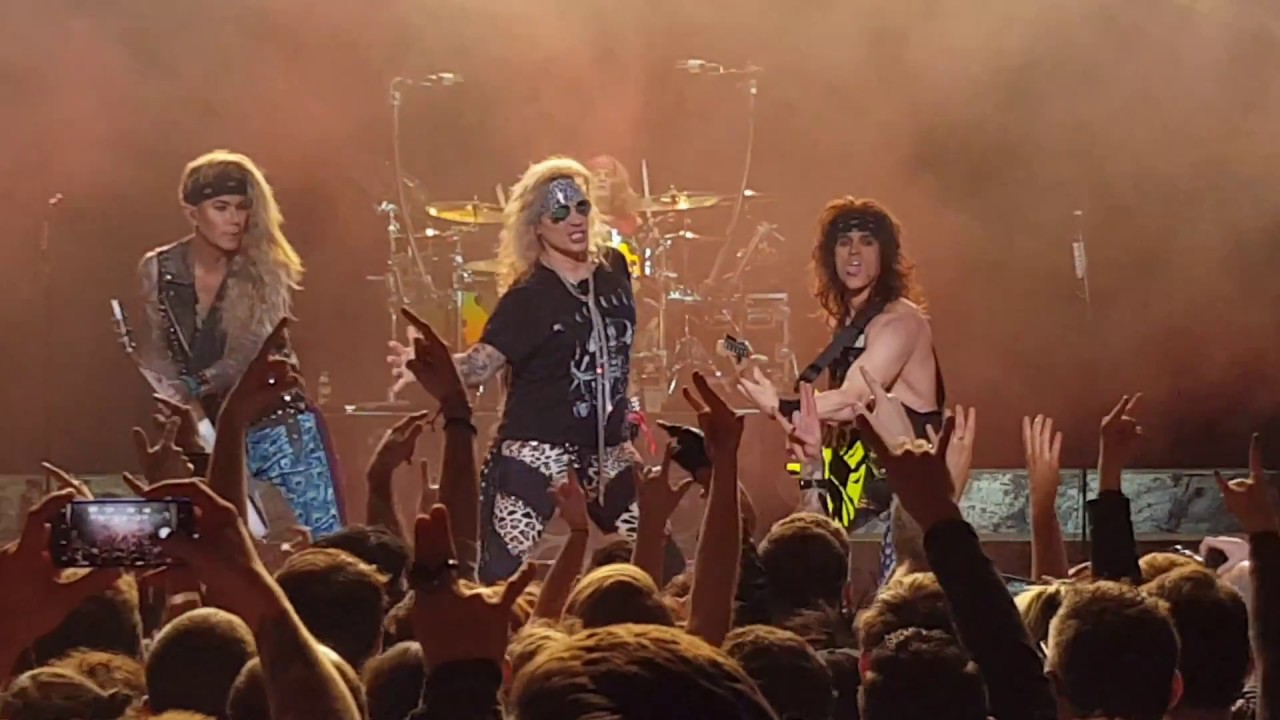 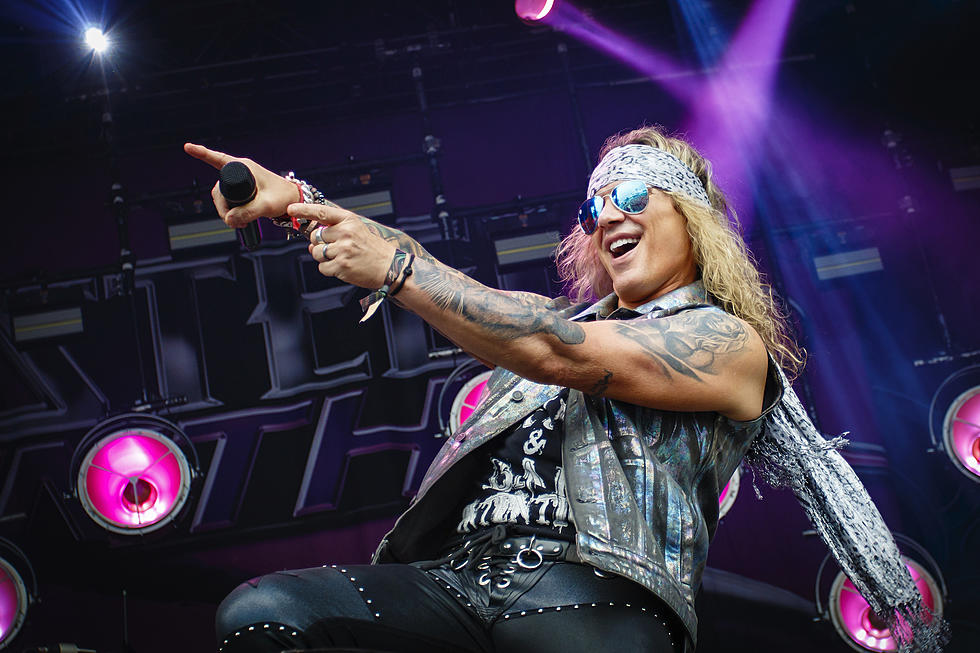 The third single, "Gloryhole", was released in April 2014 on Steel Panther's VEVO channel. On March 26, 2014 the album was leaked online and available for downloading on various websites, most likely after being streamed by the German tabloid Bild. The online stream was approved by Steel Panther.

It has been mentioned that the Sydney show was recorded for a DVD for a deluxe release of All You Can Eat. Steel Panther played the main stage at Download Festival in Castle Donington, UK on June 15, 2014. They were watched by more than 100,000 people and shared the stage with Alter Bridge & Aerosmith.

In June 2014, the band announced a short UK Tour with 4 dates scheduled for March 2015, supported by Skindred and The Lounge Kittens. The band sold out almost every venue on the tour, which included Wembley Arena, London. In April 2015, the group had a cameo in the music video for the Ninja Sex Party song "Road Trip" to tell of their sexual exploits that year. Michael Starr contributes vocals to "6969" on NSP's third album Attitude City as the head Dick Elder.

On January 7, 2016, Steel Panther's acoustic album "Live from Lexxi's Mom's Garage" became available for pre-order with the new song "That's When You Came In", preceding the album's release on February 26.

The band went on the Adult Swim call-in show FishCenter Live to promote the album on January 22, 2016.

In September of the same year, Steel Panther released a cover of Cheap Trick's "She's Tight" with the announcement that their fourth studio album Lower the Bar would be released on March 24, 2017.

Robin Zander and Bobbie Brown made cameo appearances in the music video for "She's Tight". 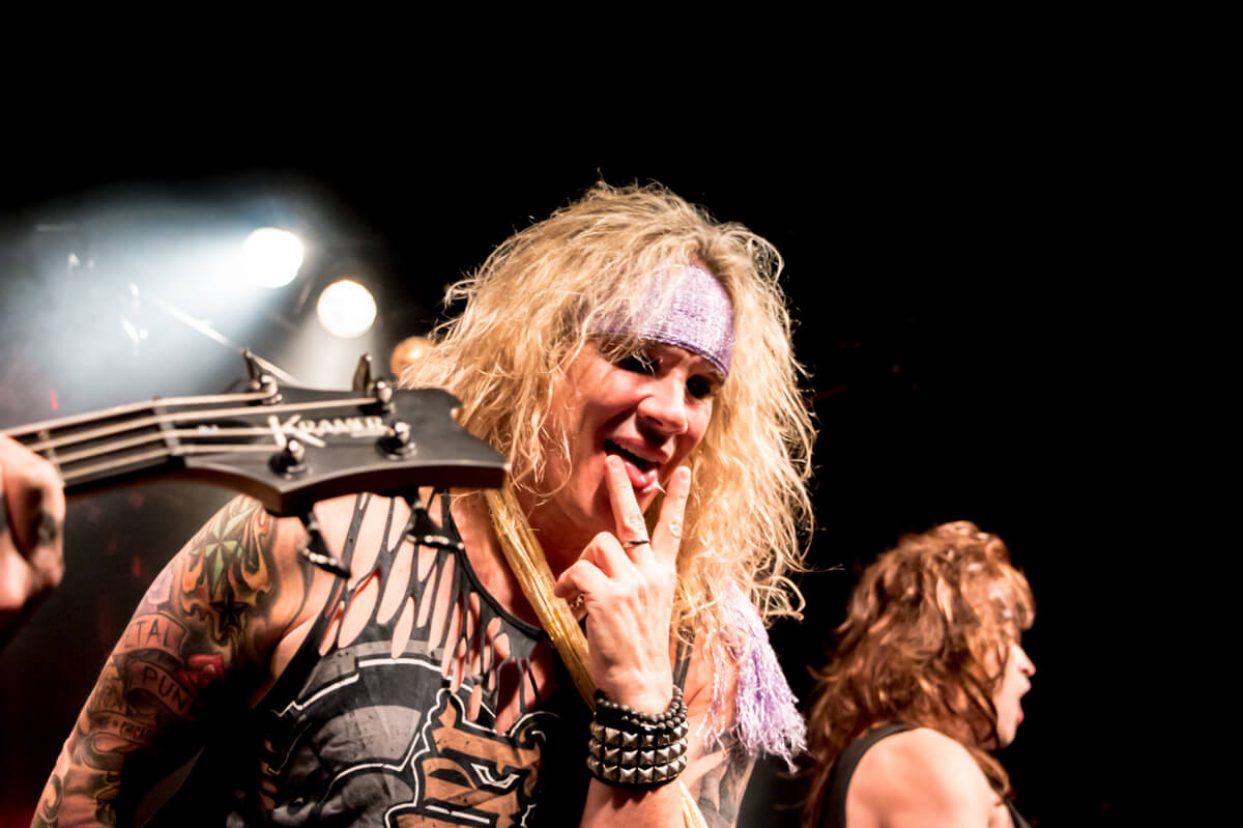 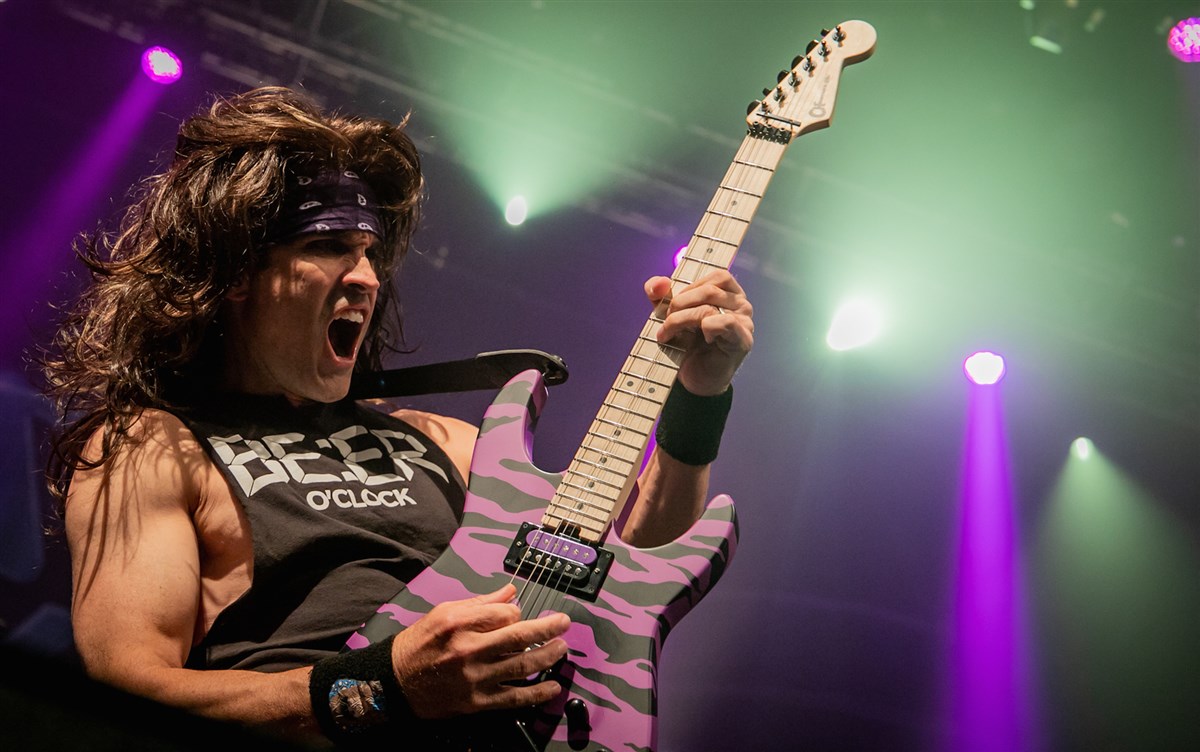 Their fifth album Heavy Metal Rules was announced in July 2019, and scheduled for a September 27, 2019 release. The music video for the first single from the album, "All I Wanna Do Is Fuck (Myself Tonight)", debuted on July 8, 2019. The second single titled, "Always Gonna Be a Ho", was released on August 9, 2019.

The third single "Gods of Pussy" was released on September 6, 2019. Music videos for the title track, "Fuck Everybody, and Let's Get High Tonight" were also released on the band's YouTube channel though were not released as singles.

In December 2020, they released "Fuck 2020" as a non-album single and music video. The song is an alternative version of "Fuck Everybody" from Heavy Metal Rules with new lyrics reflecting the COVID-19 pandemic. In March 2021, they released covers of the Van Halen classics "Beautiful Girls" and "D.O.A." as a non-album single. A video was released for the songs where they are in a video meeting setup reminiscent of Zoom.

In December 2018, the band announced that bassist Lexxi Foxx would be missing the upcoming tour to go to "sex rehab." Foxx's stand-in was Joe "Spyder" Lester, the band's tour manager, as well as Starr's and Satchel's former bandmate from The Atomic Punks. Lexxi returned to the band for the next tour, but still missed some dates, where he was filled in for by both Spyder and Tanner "T.K." Keegan.

On July 17, 2021, it was revealed that long-time bassist Lexxi Foxx had left the band. The band cited it was a mutual decision, jokingly stating that Foxx was pursuing his own business "Sexxy Lexxi's Prettiest Pets." In August the band opened up virtual auditions for a new bass player. In October 2021, the band introduced new touring bassist Rikki Dazzle, though Michael Starr revealed the band were still looking for a permanent member. In December, the band launched the "Road to the Road" promotion, featuring a bracket of 32 selected auditions to narrow down to a field of 10 finalists. 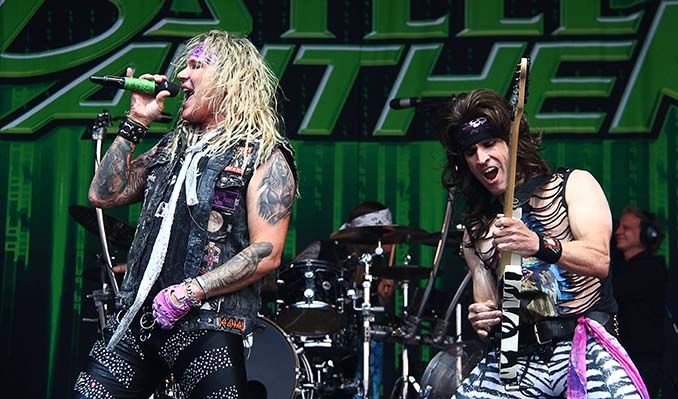 The pre-selected finalists included Dazzle and Rikki Thrash, who would both tour with the band in November and December. Spyder was selected as the new full-time bassist for the band in September 2022. 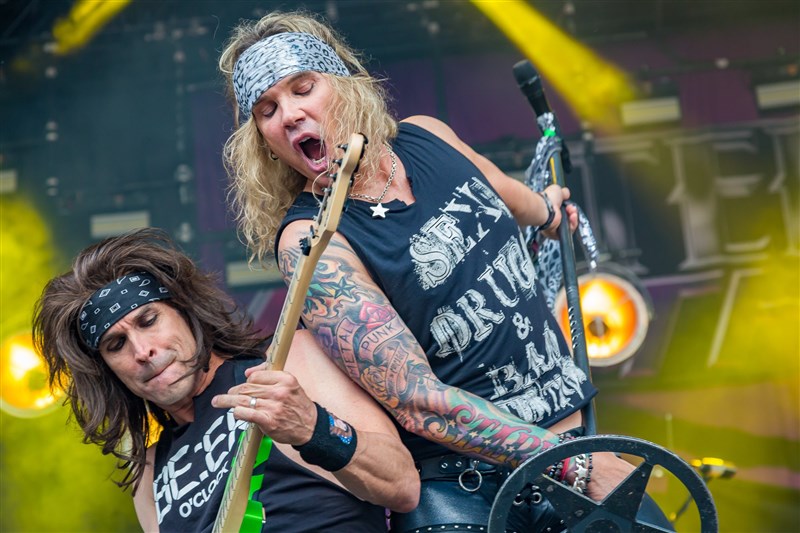 In 2018, the band faced criticism for a signature guitar tone created in partnership with TC Electronic  named "Pussy Melter", which was characterized as sexist by critics. Indie band Braids promoted a petition to remove or edit the description on TC Electronics' website; the company did so. Musicians Japanese Breakfast and Ted Leo also criticised the name and description of the effect.

The band have also been accused of racism and misogyny, particularly after the Me Too movement. A one-star NME review for Heavy Metal Rules described Steel Panther as "incel rock".