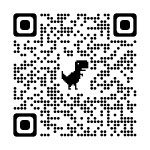 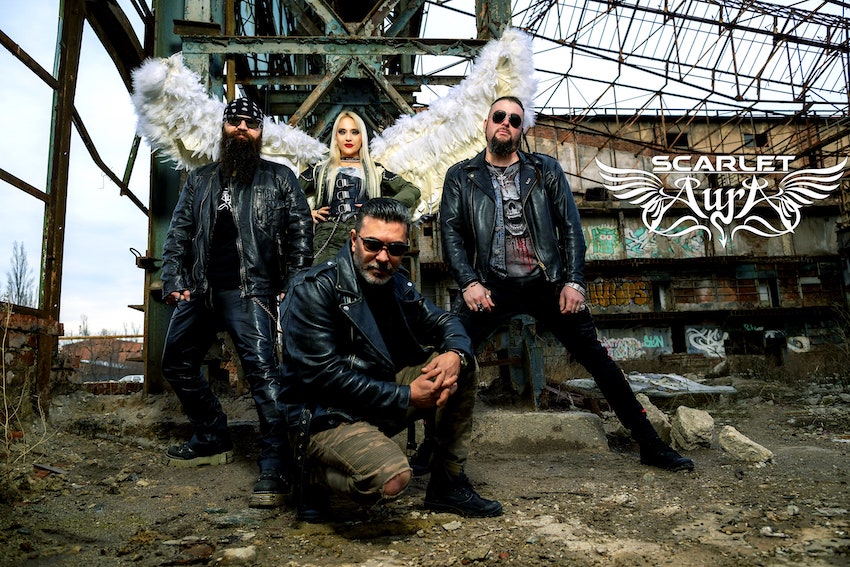 Scarlet Aura is a Romanian Heavy metal band from Bucharest, Romania. The band was originally formed in 2014 under the name AURA, but later, in 2015, they changed the name to Scarlet Aura. Since their inception, the band has released seven full-length albums, a live DVD and two EPs.

In October 2013 Aura Danciulescu (vocals) and Mihai "Myke D" Danciulescu (guitar) had left the Romanian rock band Stillborn , with which they opened before Bon Jovi show on front of 60k people in 2011 in Bucharest, to form their own musical project AURA. The first studio album named "The Rock Chick" was released on 20 March 2014 on Universal Music Romania and contained 10 songs sung in the Romanian language. The album presented a mix of alternative, Pop rock and melodic/heavy metal. AURA quickly gained a fanbase and in June 2014 they won the national selection of The Road to Kavarna to represent Romanian rock music at the Kavarna Rock Fest in Bulgaria.

In July, Aura has won first place and public award at the Black Sea Battle of the bands at the Kavarna Rock Fest.

AURA was gaining more and more recognition after the release of their album "The Rock Chick" and was invited as opening act at numerous metal concerts in Romania. In December 2015 the band announced their new name, Scarlet Aura during their show in Bulgaria, opening for Accept. The band started to work on their second album, releasing it in 2016 under the title "Falling Sky" under the Pure Rock Records label.  "Falling Sky" became the first English record for Scarlet Aura, presenting much more heavier rock sound and being produced by Roy Z. The band began touring internationally with the album and joined  Tarja Turunen on her "Shadow Shows Tour 2016" as support act with nine concerts in Germany, Austria and Switzerland.

The Falling Sky tour continued in 2017 and brought the band back to Germany with their first solo concerts. In the course of the tour Scarlet Aura performed at festivals across Eastern Europe, including the Midalidare Rock Festival in Bulgaria in June 2017 alongside Doro and Gotthard. 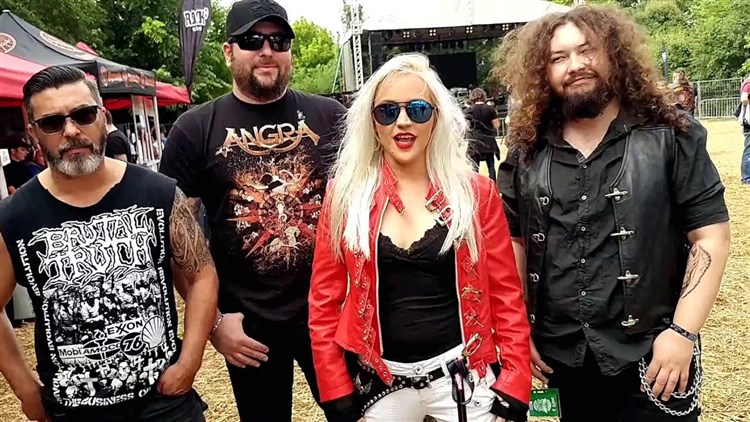 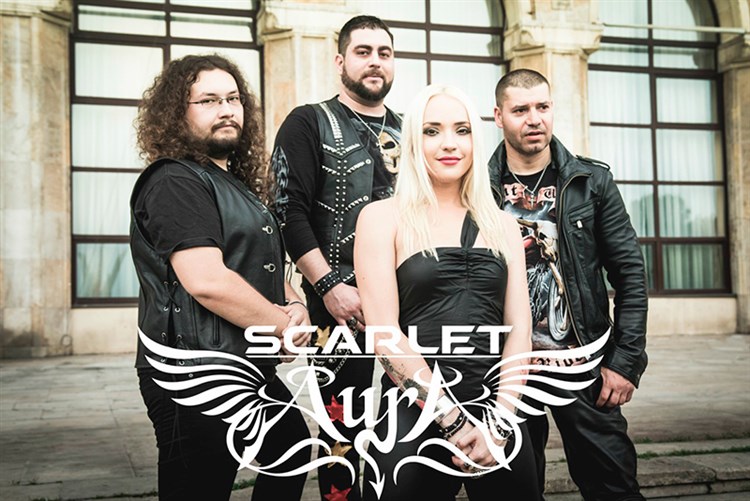 From there, the band's story continued with the new management and recording contracts – a new record deal in June 2017 with the Finnish company Outlanders Productions brought the Romanian act and their music closer to the West and North of Europe and thus the first material was promptly released – the tribute cover CD "Memories", presenting and

reinterpreting 11 classical Rock and Metal songs in their own unique style, together with the single "The Beast Within Me" were released in September 2017. In the second half of 2017 the band brought their first headlining, 17-concerts "The Beast Within Me tour" to Bulgaria, Romania, Germany, Slovakia and Italy. They finished the 2017 tour with the opening slot at the Arenele Romane in Bucharest before Dio Returns concert.

In February and March 2018, the band has toured across Europe as opening act for Rhapsody Reunion  on their 20th Anniversary Farewell Tour for 24 shows presenting music from their latest albums "Falling Sky" and "Memories". This tour was supported by the Wacken Foundation. 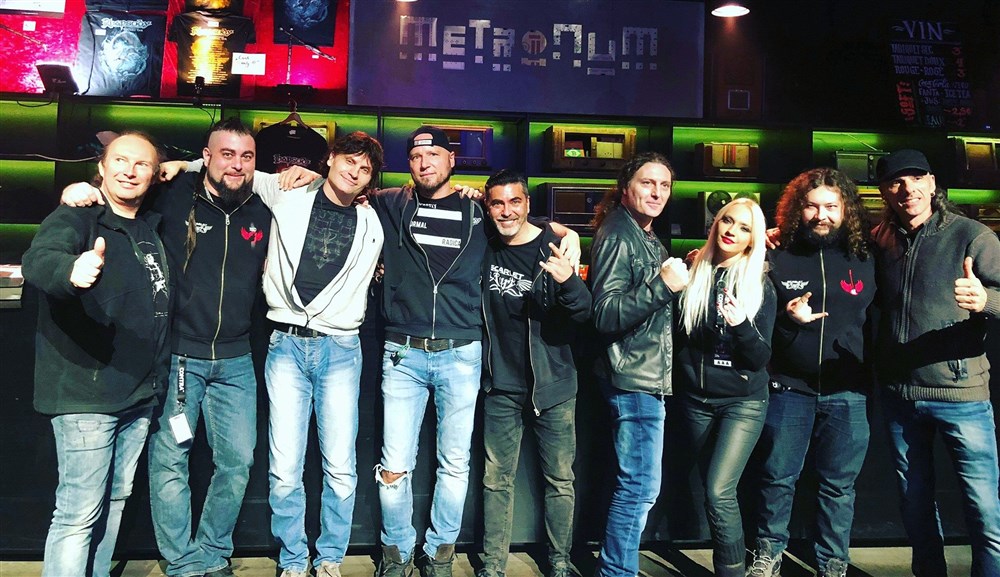 In March 2018 it was announced that Scarlet Aura will join Brazilian Power metal band Angra as a special guests for their North America tour with 31 dates supporting their fourth album "Hot 'n' Heavy". Scarlet Aura went on a headlining tour in Europe, and in September 2018 (Ukraine, Russia and Baltics) and 26 shows headlining tour in China in November – December 2018, promoting their "Hot’n’Heavy" album.

"Hot'n'Heavy" was released digitally in September 2018 and physically (digipak and double gatefold LP) in March 2019. The album marked a new direction for the band, with heavy influences from Symphonic and from Power metal to Heavy metal, but within the unique sound and vision of Scarlet Aura.

With this album, the band brought a heavy sound, and more dark and deeper lyrics about finding your true meaning and how to be yourself, how to dare to be different and have no fear as one never be alone through music, the right to fight for what you believe in and also for love, for friendship and music. 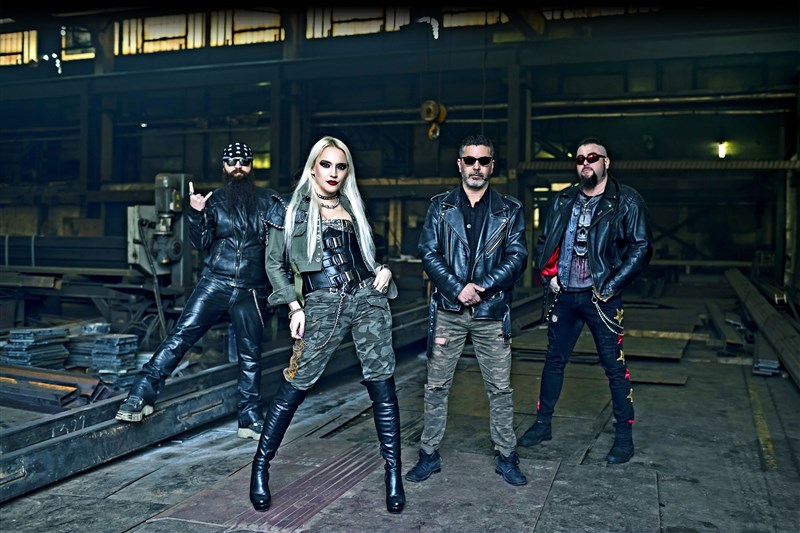 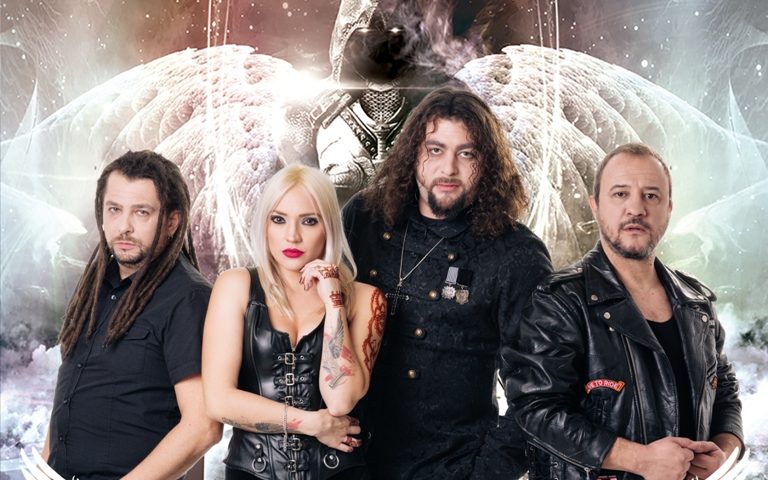 At the same time it also set the new milestone for metal bands history: it started the first part of a conceptual trilogy called “The Book of Scarlet”, which consists of 3 albums and accompanying fantasy books. The books are written by Aura Danciulescu and combine the lyrics of the songs from the albums with the story of “Scarlet” that alongside the album immerse the audience into the amazing world of Scarlet Aura. The first book in the trilogy that went together with “Hot’n’Heavy” was “The Book of Scarlet – Ignition”. The album has received a stunning reception from the critics, reaching numerous of 9.5/10 and 9/10 notes and as the consequence – the band being featured in number of publications in Legacy, Break Out, Orkus, and other magazines.

In 2019 Scarlet Aura focused mainly on writing new material and on preparing their fifth studio album  "Stormbreaker", which was released on March 27, 2020, the 2nd album from the trilogy. The first single "High In The Sky" was released in August 2019 and revealed the style, sound and the band's direction for the upcoming album. Both, single and album were released through Silver City Records, the band's own record label.

The second volume of the trilogy "The Book of Scarlet vol.II– Scarlets United" was released in 2021.

In December 2019 it was announced that Scarlet Aura would join Visions of Atlantis, Edenbridge and Leecher (as opener) on 15 European shows in April 2020 to support the release of the "Stormbreaker" album. In February 2020 the band was confirmed as special guest for Primal Fear and Freedom Call to tour in September–October 2020. The tour with Primal Fear was re-scheduled for September 2021 and January–February 2022. Due to health issues the entire tour was cancelled by Primal Fear.

In July 2020 Scarlet Aura in association with Silver City Records announced signing of the global Digital Distribution deal with Universal Music for the upcoming album, scheduled for 2021.

To mark the 5th anniversary of the album "Falling Sky", Scarlet Aura re-recorded, remixed and re-adapted the songs, in a special edition called "Fallings Sky - 5th Anniversary", which was released on April 16, 2021 by Universal Music & Silver City Records. 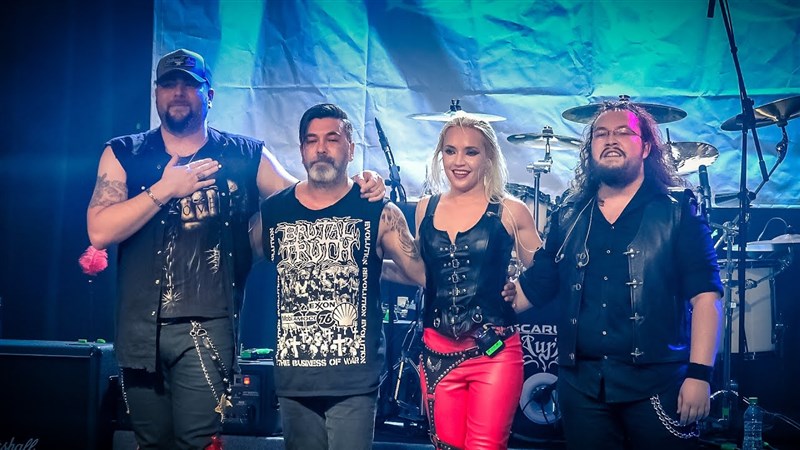 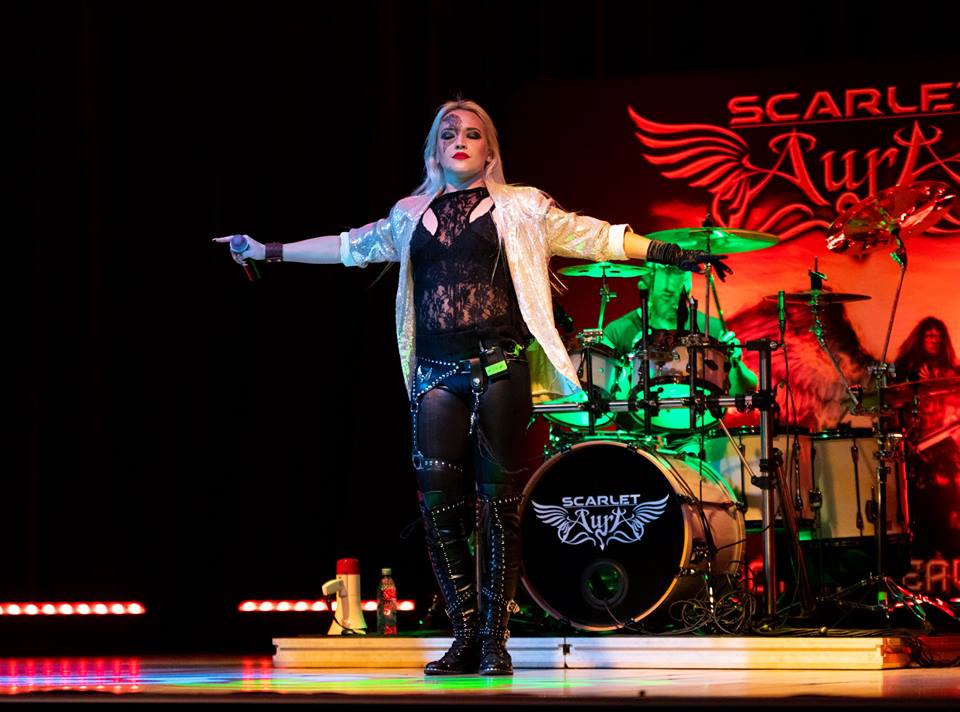 On May 7, the title and the release date of the upcoming album was revealed - "Genesis of Time", which was released on September 10, 2021 via Universal Music and Silver City Records and became the last instalment in "The Book of Scarlet Trilogy".

On November 26, 2021 the band released their second Christmas single - heavy metal cover of "Rockin' Around the Christmas Tree", continuing the tradition they have set in 2020 with the heavy cover of "Jingle Bell Rock". The same day Scarlet Aura joined the international booking agency "Nine Lives Entertainment".

In February 2022 the band has announced the new release - double acoustic album "Under My Skin", set to be released on April 22, 2022. The first single "Ya Svoboden / I Am Free" that the band did "in a universal call for peace and unity" was released on February 28th 2022. On the day of the album's release, the second single "Glimpse in the Mirror" was presented.

The Book of Scarlet Trilogy: